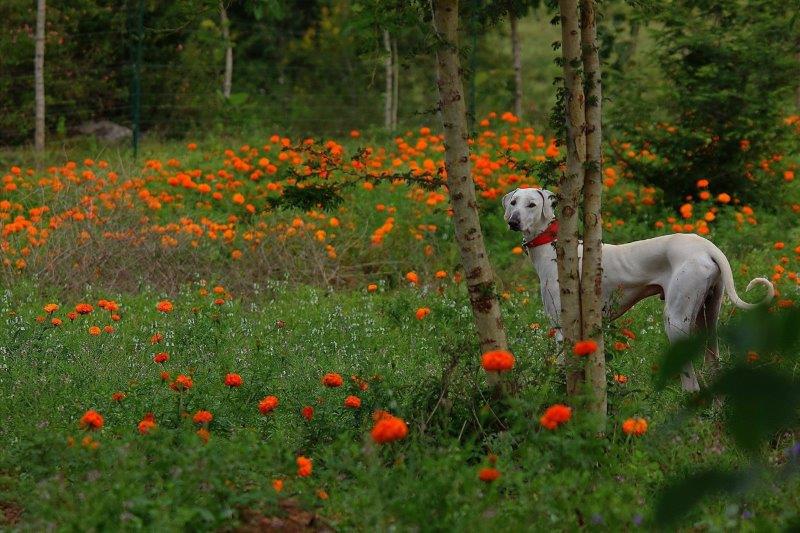 How much did you purchase it for? Is what I heard as I stood there in Mysore on a morning of 2012. We were the exotic ‘Indian Breed’ among the 500 plus entries at the dog show in Mysore.

I paused for a second as he was among the small group that had gathered looking at us while we waited our turn to enter the ring for the judging during the show. I looked at the man and replied: How do you put a price on your heart? He looked at me as if I was from a different world and left.

The You Tube video taken that day by a friend in Mysore has had till now 94000 clicks and more. So famous far and wide have been the looks of Jabu and his brother Simba that hiw pictures have surfaced at all sorts of places. His great looks made his photograph appear in the local newspapers a couple of years ago when they mentioned that Mudhol Hounds were being inducted in the Indian Army. Possibly the press didn’t find a better-looking hound…

He was the darling of the dog shows as children and women alike would come to pose and take pictures with him. Guests at Dhole’s Den were fascinated by this gentle giant, his handsome looks, stance and that Mr. Cool look in his eyes.

At Dhole’s Den he would look endlessly into the distance and gaze at infinity perhaps. He was so fascinated by the time he spent there at one corner of our property, we named that Jabu’s Corner. He probably meditated at that spot. All the years till his brides arrived last year in the form of lovely young girls called Thabisa and Jameela, he ran away regularly to the villages. Well I am quite sure it wasn’t the scent of the females from the neighbouring villages that might have attracted him. Unlike at home he would run and mark his scent at people’s houses a kilometer away from home and while we took the jeep to pick him up, we could see his long strides through the green landscape of Bandipur. A milky white Chippiparai with an orange collar lovingly made by my wife every time for him. He was truly a free spirit.

Unlike his younger brother Simba he was a long distance runner and didn’t get easily tired and was strong, resilient and when he didn’t agree with you would just sit and look straight at you, driving back the point that you couldn’t just carry him: He was big!

Yesterday, 3rd August 2019 I rushed to Bandipur with my friend Dr. Jayaram the veterinarian only to find he had developed a bloat and had to be rushed to hospital. I had earlier received a WhatsApp video that showed him walk in the morning and based on that I decided it would be fine to take the vet just in case and drove to Bandipur.

The gang of hounds greeted me with a howl and the two girls jumped over me and I climbed the staircase to my room and found Jabu sitting down and upon seeing me wagged his tail. His body temperate found low, we tried to raise the same and stabilize him and prepared to leave and we left soon and on the road after crossing Gundlupet and Begur found myself alone with my friend and his son who was driving us. After getting up a couple of times I found he had lay himself down and upon seeing his paw open, I asked the car to be stopped so that we check on him. We stopped on the roadside and upon opening the car we suddenly gazed at him and I heard the lines: He is collapsing Karthik…

His pupils dilated he tried looking at me, but the gaze never set. I tried to massage him, but his head dropped, and he left me there within seconds without even a moment to say goodbye. His heart had stopped beating. Just like that.

Ripped away from my life all that was left was to drive him with my head full of questions back home. There I was left without a son whom I didn’t father like many of you who will be reading these lines did, but by no measure did I ever treat him otherwise. A piece of me gone just in an instant, became lifeless and left me too shaken to even say a word.

Flashing through me were images of him looking at me in my room waiting for a sign or falling asleep and I would cover him with the handmade comforters by my mother from her own sarees. All our hounds have enjoyed these, and he was no exception.

Seems like yesterday that I held him in my hand after Zulu had given birth in my own room. He was never too loud, never complained about things he didn’t get. All he complained was when we asked him to go back to his room and he made a distinct howl that voiced his resentment clearly and loudly. Jabu my boy whom I lifted every time to put him close to his mother’s ‘Milk Bar’ as he would roll away in the box looking for it while his brother would instantly know what to do. Jabu or Great Joy in the Zulu tongue was my pride, my first born and in a way like me drifting through life, pausing to look at things and starting all over again.

It was his return with his brother that made me move from Germany to India in 2011. He singlehandedly finished 4-5 chicken in the coup in a day and would gleam at me. His eyes had a light that would glow when he gleamed.

Placing him in Ekant my office overlooking Shaka’s final resting place I needed to take some time. This fine boy mine with a neck that was the envy of many a canine and legs lay curled, had bitten his lip and it was evident he had a very bad night behind him and I wasn’t there to hold him or even take him to the city. I caressed him repeatedly as he had turned cold and stiff and the life in his body had faded away. My only thumb hurt me, and I realized that moment that it was the only time that he had snapped at me out of pain. He was gone and had left me alone.

He lay there like a Baby Jabu whom I had caressed in the presence of his mother Zulu. It is so difficult to hold back my tears and my family are in great grief over loss of our favorite boy. My wife will never be able to make a new collar for him. A friend who shared breakfast with him has felt choked by the rude way he has been taken away so abruptly from our lives. The sheer number of condolences and words that I have received from family and friends shows how many lives and souls he could touch with his gentleness and persistence in his short life.

He was our ‘Gutster’ (The Good one) and I couldn’t save him. Never shall I now hear his long and baritone howl to greet me and his typical movement that he reserved for me. I will not see him jump again in mid-air for a titbit, or hear his gentle knock on my door nor receive his kiss. He was with all the bullying he took from his father, mother and even his brother never a sad boy. He found his way to get his things and I always made it a point he was never short of anything. He played with guests, children and staff alike, very much unlike his father who kept his time solely for me. But even in that my voice would ring Jabu and he would race up to me and join us on our walk, stopping in between to ponder, meditate or possibly fix his eyes on the hare, the peacock or the deer just outside our fence.

The staff had prepared for his final resting place next to Shaka’s and we carried him in his favorite comforter. My friend Nagesh and Dr. Jayaram helped me carry him and we laid him to rest.

While we said our last goodbye to him, I told him that every sunset from this day on is a sunset less till the day we shall be united again in our love.  And that sums how I feel on his loss. My only solace is that his dad Shaka must be with him.

I had this time allowed the other hounds to be able to say goodbye in their own way and I was amazed to see their reaction. Zulu his mother and Simba his brother walked in and smelt his paws and him as he lay there and turned away. She demonstratively moved away into the grounds whilst Simba stayed on and sat next to me while I watched over Jabu. The two young girls came in and reacted in a similar fashion. The remembered him this morning on their daily walk by smelling the places he would have stood and left his scent. The hounds as I understand now live in the present, this moment and not one moment in the past nor the future…

At Shaka’s demise where we had a week to cry as he suffered daily and when our hopes finally came crashing down, we were relieved that Shaka had no more to suffer. But here this boy of mine had had to lay there the whole night seething in pain and being unlike the others, he bore it with great fortitude and dignity and even waited for me in my room till I arrived the fateful morning without complaining and bearing all the pain. It was as if he had waited just to say a final goodbye to me by wagging his tail.

My guests at Dhole’s Den met me later over dinner and narrated that there was a rainbow in the sky while we were laying him to rest. The heavens showered my boy with the colours of the rainbow and even showed the bridge which I in my grief had failed to see.

It’s not easy to just wish him a good rest in peace and continue with life for there are so many memories that connect us. The canines possess perhaps the ability to fall into a role just as we do as parents and they as four legged children who always greet you with gusto and while I sat down later still shattered and not accepting what had just happened in our life, I found my face and tears licked by Jameela as if driving home the point: I am here too, cheer up and be with me. That instant, I realized I do have my 4 to take care of and continue to live for them and their unconditional love. Jabu now free from his body, though gone all too sudden and that breaks our hearts, but even in that has set the ball rolling for various questions, I was looking for an answer. He was with his gaze into infinity perhaps a philosopher who has finally taught me what matters in life and what it takes to have a view…

I love you Jabu… Goodbye for now…

Thank You for allowing me to share my feelings with you. 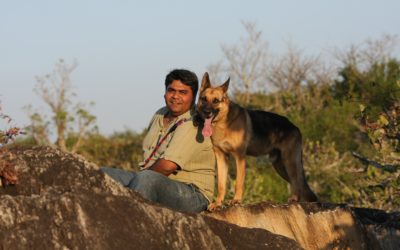 It was a difficult 2010 with the year ending on a bad note and taste when I stumbled upon adopting you from my dear friend Nagesh. I had always seen...

END_OF_DOCUMENT_TOKEN_TO_BE_REPLACED 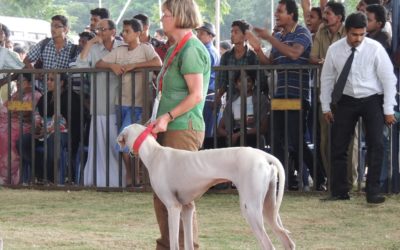 Jabu and Simba participated at the Dog Show held recently at Mysore and won Best of Breed medals. Jabu is already aChampion and Simba is on his way...

END_OF_DOCUMENT_TOKEN_TO_BE_REPLACED 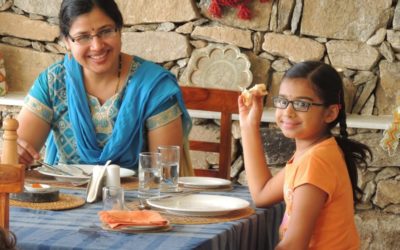